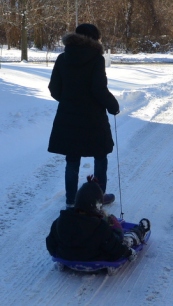 I used to really like the winter. At least, I felt like enjoying winter was a requirement of anyone who despises the summer. Like you can hate one, but not the other. Otherwise, you’re just a complainer.

But since it’s winter, and most people hate the shit out of winter, I figured I’d dedicate a blog post to it and maybe give the people what they want. Plus, the Super Bowl is on right now and I need something productive to keep me busy in between the commercial breaks, and blogging about the weather seems productive enough.

Dear Winter. You suck. Here is why:

1. I always spend more time dressing my kids in snowsuits, coats, hats, gloves, boots, scarves, two layers of pants, three pairs of socks, and two shirts with an extra sweatshirt than they spend actually playing in the snow. Like, wayyyy longer. And it just doesn’t seem fair.
2. Not every type of snow yields decent results when building a snowman. The light, powdery, fluffy stuff is impossible to roll into a ball. But the kids don’t understand that and want to know why we’re building a “snow lump” instead.
3. Have you ever dragged children around on a sled, cross-country style, in the freezing cold? Maybe it’s fun for some people, but an Olympic athlete I am not. I’m usually huffing and puffing worse than an 85-year-old chain smoker by the end of my block, meanwhile my kids are begging me to “pull faster!”
4. There is no graceful way to slip on ice. There’s a painful way, a mortifying way, and an ass-bruising way, but no graceful way. Except maybe if you’re Kate Upton.
5. Shoveling. Because potentially throwing your back out and/or risking potential cardiac arrest beats the dangers of an icy walkway. Right? Right??
6. No one wins with board games. NO ONE. Young kids holding tiny game pieces + everyone being forced to take turns + someone having to lose eventually = mommy chugging wine before noon.
7. This might be mostly an NYC thing, but getting a parking spot is a pain in the ass enough on its own, without having to worry about needing four-wheel drive to be able to pull out of it.
8. After Christmas, wintertime holidays are nothing special. I mean, they’re great excuses to get a day off, but I work from home on those holidays anyway. And don’t get me started on the most pointless holiday in the whole damn calendar: Valentine’s Day.
9. There is no deeper hell on earth than a nasty mid-winter stomach virus sweeping violently through your home, complete with green-tinted children and vomit-covered couch cushions. And of course, the promise that you’re up next!
10. I’m not a fan of facial pain. That’s right, facial pain. You know, the kind of pain you feel when it’s so fucking horribly cold outside that it literally makes your FACE HURT? Well, I don’t enjoy that.

For argument’s sake, the winter does have its moments. You can drop off and pick up your children from school without a bra on and no one will ever know. Trips to the park are entirely off limits. The sun sets about ten seconds after it rises, so you can put your kids to bed as early as you want. The phony conversations you have when you run into acquaintances are cut short because everyone is freezing their asses off. That being said, I’m still looking forward to the end of this winter. I doubt I’m alone in that.