Today we’re making Highchairs & Headaches history with my very first guest blog post.  How freaking big time am I, having guest bloggers and stuff?? And it’s an awesome post from a really talented writer, too!  Fellow mommy and humor blogger Marcia Rosenberg is sharing her no-fail secrets for coping with the craziness of baby’s first year.   Don’t forget to check out her hilarious blog, My Own Decade.

My kid freely rolls around in the dirt and chews on TV remotes, all while I’m writing a book. Here are some coping mechanisms that I discovered to chill out, get shit done, and be the happiest mommy-baby duo on the block.        By Marcia Rosenberg 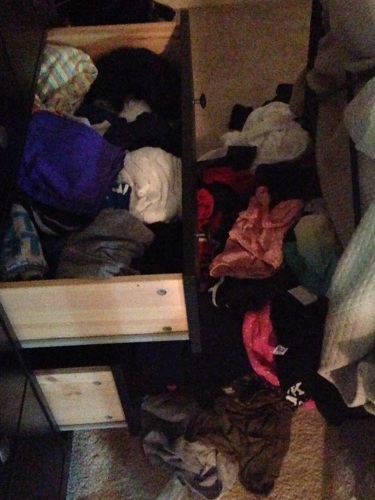 Affirmation #1: I Will Embrace the Id in Kid. Kids are funny little creatures. They possess the most sincere intentions and act purely out of impulse. My friend’s kid eats dinner naked, on the couch, with a lap tray. Every night. She doesn’t reprimand or judge. It’s part of her child’s everyday routine. My daughter has had an ear-splitting, tongue-rolling Mexican trill since she was four months old. Every time she cries in public, we get a lot of disturbed looks. I just laugh about it.

Affirmation #2: I Will Have a Common Sense Approach to the Question, “Is This Actually Dangerous?” My daughter hates baby toys. How astute of her. Her favorite activities are: crinkling and punching plastic bags, eating TV remotes and cell phones, licking the tops of beer bottles,  knocking over kitchen chairs, and emptying the refrigerator. Granted, some of these baby pastimes are more precarious than others. If she has a curiosity about something that could potentially present a danger, I’m on her like a shadow. Spending time hovering over her is a concession that I make so that she can learn and have fun exploring. It also helps with our bonding. Of course, even I have limits. Meat cleavers, blind strings, and nails aren’t allowed for play. She loves romping around in my liquor cabinet, though. Is that a bad sign?

Affirmation #3: A Messy Baby is a Happy Baby. I’ve observed that most babies love crud. I always let my daughter’s curiosity be her guide, even though she has some pretty funky habits (see Affirmation #1). Highlights: licking the sweat off of my leg after I go for a run, slapping the toilet seat, and gnawing on the sole of my shoes just after I’ve just been outside. To all this I say: here’s to a healthy immune system! My cousin was in the park with her child on one of the last temperate days of fall. He was mucking it up before bath time, rolling around in the dirt and having a blast, and other toddlers took note. I saw several kids run up to my cousin’s child, wanting in on the action. Yet their mommies whisked them away, cautioning them “not to get dirty.” I felt bad for these kids. Parks are for playing, and small children don’t play neatly. Aside: I don’t go crazy about hand sanitizer either. I do use it, but sparingly. My dirty ways are substantiated by the hygiene hypothesis people!

Affirmation #4: A Messy House is a Happy House. Compulsive cleaning used to be my form of procrastination. I’d put off writing if the glass table had a spot on it. One day, I realized that I Windex-ed my table 6 times in 24 hours. That’s insane. Now I let my dishes stack up in my sink, and I only allow myself to clean up once at the end of the day. During waking hours, my habitat looks chaotic- toys are everywhere, beds are unmade, baby food is all over the kitchen. I try not to think about it, and now I have more time with my daughter (and for myself). Daytime visitors always understand- it’s the power of the Best Excuse Ever.

Affirmation #5: I Will Exercise. Sorry- can’t use the Best Excuse Ever (see Affirmation #4) on this one! I run between 30-40 miles on average per week, whether I’m with my baby or without her. I did NOT do this before I was pregnant. I was motivated to start distance running after checking out my post-pregnancy body in the mirror when I got home from the hospital. It was… shocking. The postpartum blues served to intensify the voice in my head that shouted, “What the hell happened to you, Muffintop?!” As soon as my doctor gave me the go-ahead to start running, I took off. I can now run a half-marathon in a pinch. I lost all my baby weight (35 pounds- plus an additional 15 pounds) in just 7 months. I also found that having a need to incorporate exercise into my routine actually helps me to create a general schedule for the entire day. PS- although I try my best to eat clean, I also indulge (usually daily) in some kind of caloric chocolatey dessert, like this. Being a runner allows you to do stuff like that.

Affirmation #6: I Will Never Look At WebMD. If you’re a self-diagnosed hypochondriac (like me), WebMD is a nightmare. A quick search using the phrase “hives children” produces a page that at first reads CALL 911.  I always ask this to myself at the onset of concerning symptoms:“Has her temperament changed?” Recently she had a rash that was worrying to me, but she was bouncing around as usual. I opted not to call the doctor- and the rash disappeared the next day. I also like this symptom analyzer from the American Academy of Pediatrics. And I no longer consult WebMD for myself.  I used the site to research the cause of my migraines I suffered from during my first trimester, and I became convinced that I had either a malignant brain tumor or an aneurism that was moments away from rupturing inside my skull. I’m fine.

Affirmation #7: I Will Raise My Daughter to be Independent. I am not a believer in attachment parenting, or whatever this is- even if my daughter still doesn’t have any teeth at almost 13 months. My weaning target was 12 months, but I stopped nursing at the 7 month mark when I noticed that she was regularly holding my boob like a bottle. She still has pretty bad separation anxiety, but one big bear hug and a pat on the tush is usually enough to get her to crawl off and explore on her own. I’m never happier than when she does things by herself for the first time- not only because it will free me up in the future, but because it’s another sign that she’s beginning to feel secure.

Affirmation #8: I Will Continue (Or Start) to be Awesome. I refuse to toss my professional and personal strivings to the wind just because I have a baby. Despite having no hired steady help, I’ve managed to create time for myself. (You can too. You might be arguing with me in your mind, but you can). My momspiration (my cousin) managed to get a masters degree from a top tier school, change careers, travel to at least one third world country, become fluent in a fourth language, and move across the globe within two years from the time she got pregnant. She’s not rich, and she did this stuff mostly on her own. She is a genius with her brain, ambition, and time management skills though.

Affirmation #9: I Will Drink With My Husband (And Whoever Else Wants to Join Us). My parents came to visit us from the East Coast. I handed my daughter over to them, said buh-bye, and went to Napa with my husband for a long weekend. I always make a point to take a boozy break once or twice a week- whether it’s at home sipping some wine and watching Netflix after my daughter’s asleep, or knocking back a few with tranny friends in West Hollywood. For the latter type of occasion, since I have no family where I live, I hired a go-to babysitter whom I trust. It’s nothing new, but she told me that the parents she works with who go on date nights regularly appear to be happier. Amen.

Affirmation #10: I Will Stay Away from Neurotic Moms. I don’t shmooze with other women who give me agita in general, or who make me feel bad about my parenting style. For me, this means that I don’t hang out at Lululemon, or with my own mother. I had the misfortune of crossing paths with a shrew of a woman the other week. She was frantic because her daughter didn’t have the right hair accessory for her Christmas photos that day- it was early October. She asked me for some guidance (“What do you do for your son’s pictures?”) to which I replied, “You’re asking the wrong person. My daughter wears the same stained Carter’s onesie every day, and she doesn’t have a Halloween costume yet.” She grimaced, I giggled. Life is better when you surround yourself with people who make you feel at ease. Relaxation breeds comfort which in turn breeds happiness. If you’re feeling good about the way you parent, your own little breed will feel the same.

Marcia Rosenberg is a freelance writer and blogger based in Los Angeles. She really does love her mom. Read more at http://myowndecade.blogspot.com/ and on Twitter: @MyOwnDecade.