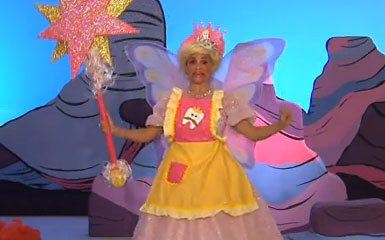 The Tooth Fairy, as depicted on Yo Gabba Gabba. Terrifying toothless children since 2008.

Little M lost his second tooth today, just a week or so after losing his first one.  He’s only five, so I thought I had a little more time before I had to throw on my fairy wings and start trading pesos for pearly whites.  But here I am, sifting through my purse for a buck or two to place under my little man’s pillow tonight.  You might think a buck or two’s a little cheap, but we’ll get to that later.

Losing a first tooth is a major milestone for kids.  When they’re babies you throw a party practically every time they take a shit, but as they get older their little firsts tend to be few and far between.  So when something big happens, as parents, we tend to be overly enthusiastic.  Losing teeth is a big deal for us, too.  We get to be the Tooth Fairy! And take cute little toothless pictures to show off on Facebook and Instagram!  And did you know that they even sell little keepsake boxes for storing “baby’s first curl” and “baby’s first tooth”? You know, if collecting dead body cells is your thing.

But just like any other matter in parenting, it’s not always all hunky dory.  There’s some stuff about losing baby teeth that I was simply not prepared for.  I’ll now share these things with you, so that you might be prepared when the situation befalls you.  And if you’ve already been through this ordeal with your kids, well, thanks a lot for the heads up.  Love being blindsided by crazy parenting shit.

It’s terrifying – I was SO excited when my little boy lost his tooth.  Like, maniacally jumping up and down for joy, totally thrilled for him on this HUGE day in his little five-year-old life.  Too bad he was straight up HORRIFIED.  I guess we sometimes look so forward to these major milestones in our children’s lives that we forget how it feels to be the one living them.  I mean, his tooth? Just fell out of his mouth.  While I had explained that it would happen someday, that it’s totally natural and happens to everyone, and that it’s even kind of fun to wiggle the tooth around when it first starts feeling loose, there’s no real way to prepare a little kid for seeing an actual part of his body detach itself.  It’s pretty heavy shit for a five year old.

It hurts – The night before the tooth fell out, Little M burst into my room, crying hysterically that his tooth was killing him.  I was like whaaaaat?  It’s just a loose tooth!  I don’t remember loose teeth ever hurting when I was a kid.  But, then again, I don’t even remember how old I am half the time, so my memory is irrelevant.  I filled a teaspoon with some grape-flavored Tylenol and sent him off to bed.  The next morning, when the tooth was hanging by one bloody little thread, and he was sobbing into his Cheerios, I honestly didn’t know what the heck to do.  Do I pull it out?  Do I tell him to pull it out himself?  Do I leave it alone? What if he swallows it? What if it falls out of his mouth in school and he can’t find it?  What if it never falls out at all?? What if I stopped freaking the hell out long enough to realize that the damn thing just fell out???

How much to give? – I had originally planned to fork over $20 for the first tooth.  Not so much that he’s spoiled, not so little that I’m cheap.  But then the damn tooth went and fell out the same day we had an epic snowstorm here in New York– and there was no way in frozen hell that I was sledding down to the nearest ATM for twenty bucks.  Since I only had a fifty dollar bill, I hesitantly settled on spoiling him more than originally planned.  No biggie– I justified it by reminding myself that I was merely returning some “borrowed” money from his piggy bank (how else do you tip the pizza guy when you’re short on cash??)  BIG MISTAKE.  Now everywhere we go, he’s bragging to EVERYONE about the stupid Tooth Fairy giving him fifty big ones.  I keep getting this patronizing look from people as they mutter their insincere congratulations, followed by a “wowww, I wish the Tooth Fairy was THAT generous when I was little …” Well screw you, you’re not little.  You’re old.  And it’s called inflation.  Asshole.

Being the Tooth Fairy sucks – That whole fifty dollar conundrum aside, it’s not easy being the Tooth Fairy.  She’s got a tough job.  She has to sneak into the room of a sleeping child, rifle around under the child’s pillow (where his HEAD is resting peacefully), frantically searching for a teeny tiny tooth, without being detected at all, then remove the tooth and VERY CAREFULLY slide money under the pillow, and then get the hell out of there before the kid wakes up.  To make the task extra easy on me, my son has a freaking bunk bed –  I had to stand on top of a chair while performing this near-impossible task.  And Little M was basically lying right on top of his tooth.  It took like fifteen whole minutes to get this done, and I almost threw the fifty on top of the bed and called it a night at least twice.

Off topic a bit, but a quick “Tooth Fairy” internet search led me to a site detailing how to make your own tooth-shaped pillow to put the child’s tooth in!  And I thought the plastic bag I put Little M’s tooth in was a smart idea.  Well, at least mine didn’t involve sewing of any sort.

To save or not to save – My mother-in-law saved all of my husband’s baby teeth, which she recently tried to pawn off on me, to which I was like, um PASS.  And I have been making fun of her for years about saving those gross things.  But now I possess two of my own child’s baby teeth, and I feel like you couldn’t PAY ME to throw them away.  They are, like, a part of him and stuff.  Now I’m thinking of investing in a little dead body cell keepsake box of my own.  Um, future daughter-in-law?  Just 25 more years ‘til they’re all yours.

The Tooth Flu – Hey kids!  What’s the BEST way to get sick?  How about by putting your dirty little fingers in your mouth ALL DAY LONG?!  Preferably during cold and flu season!  Tooth #1 gave Little M a bad cold followed by a double ear infection.  Tooth #2?  Strep throat.  I don’t want know what’s in store for tooth #3.

3 thoughts on “On Being the Tooth Fairy”